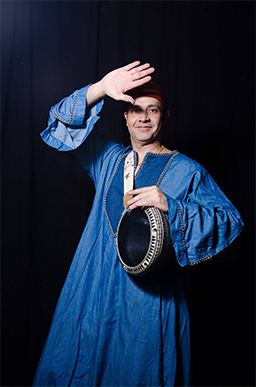 Karim Nagi is a native Egyptian drummer, DJ, composer and folk dancer. He is the creator of Turbo Tabla, and has released four internationally distributed CDs of this unique brand of Arab House/Electronica using acoustic instruments. Karim has authored instructional DVDs for the Tabla/Doumbek, Riqq tambourine, Maqam & Taqsim, Drum Solo for Dance, and Arab Folk Dance. He is well versed in the ultra-traditional styles of music, and has lead the Sharq Arabic Music Ensemble since 1999. He promotes and fosters the study of Arab dance in the USA as the director of the Arab Dance Seminar. Karim performs and teaches Tahteeb Cane Dance, Dabka Line Dance, and Zikr Sufi Dance. He taught at the New England Conservatory of Music for 5 years, and has lectured and presented at Harvard, MIT, Yale, Bowdoin, Princeton, Stanford, William & Mary, Georgetown, and several Community Colleges. Additionally, Karim Nagi's Arabiqa program has conducted over 300 school assemblies across America, exposing young audiences to Arab traditional arts. His performances boast a dynamic concoction of live drumming and dance, done in unison. Because of his proficiency in both music and dance, his workshops deliver students to a new physical understanding of the connection between these two disciplines. As a dance and drum teacher, Karim has taught in dozens of festivals in the United States, Asia, Europe and Cairo, as well as all major Arab Culture festivals in the USA. Karim Nagi is a true crossover artist, uniting the Cabaret and Tribal, Traditional and the Modern, the Ethnic and the Urban.

Workshops Karim Nagi will be teaching!

Open to ALL Levels!
It's time to raise the bar for rhythmic literacy! A dancer's immediate connection to the music is the rhythm produced by the Tabla and percussion. Karim teaches each rhythm using the three-sound clapping approach. Karim then performs sample rhythms on the Tabla. Students will learn each rhythm by name, "dum-tak" vocalization, and clapping. Afterwards the dancers will learn choreography segments to help gain bodily control with the sample rhythm, putting theory into practice. By physically personifying each Rhythm, bodily mastery of that rhythm will be achieved. This movement workshop is perfect for any dancer who wants to better understand what they are dancing to.

“Culture Vs Fantasy and the responsibility of the artist”

Open to ALL Levels!
When presenting the performing arts of a culture, the artist becomes a representative. Audiences will be influenced by the artist, and their impression of the cultural material will be affected. Whether the artist is a native of the culture, or an outsider, it is their responsibility to have complete awareness of this influence. Karim Nagi, a native Egyptian and immigrant to the USA, musician, dancer and public speaker, will explain how to manage the expectations of the audiences. Through his intensive teaching and touring experience, Mr Nagi will describe how to be both creative and authentic while embodying the traditional essence of the cultural arts being performed.

Open to Pro Level!
Dancing with sticks and canes is a quintessential expression in Egyptian village dance. The southern half of Egypt, know as Upper Egypt due to its higher altitude, is called "al-Sa'id" in Arabic (pronounced iSa-yeed)". The Saidi people are famous for this semi-acrobatic stick dance called "Tahteeb" for men and "Raqs Assaya" for women. It is essentially a form of martial art where the manipulation of the stick and the demeanor of movement replicated village life or battle scene. The main motions with the stick include spinning, twirling, rowing, flipping and striking. Often two dancers will enact a friendly battle with synchronized sparing and coordinated strikes. But the essence of the Saidi dance is in its demeanor. The body moves heavily and confidently with a subtle pulse. Grace is more valued than aggression. This dance is done solo or in groups where the sticks are operated in unison, and men and/or women play together. Karim teaches with the strait cane (any dowel between 3' and 4') and covers all the basic spins, flips and strikes. He stresses ambidextrous technique and utilizes both hands for the entire lesson. Double Cane is also demonstrated. The class culminates in a short choreography.